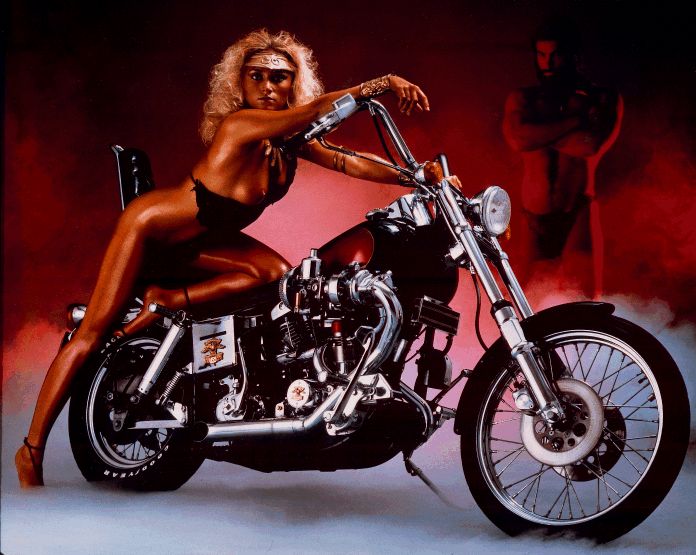 The first successful turbo for the Harley big twin was this design which featured an IHI Turbo, an SU CV Carb, equal length primary tubes joining into a 2-1 turbo header; a 2 1/2" turbo exit pipe with a 3" diameter turn-out muffler. The RB Racing kit featured a fuel pump with a boost sensitive pressure regulator, a RB Racing billet Boost Master wastegate, a chromed inlet plenum, and a glycerin filled boost gauge. These kits produced 150hp @ 15psi of boost. Some kits were produced with black chrome headers (see other chopper picture). Although these kits were successful three things spelled their doom: (1) IHI discontinued the particular turbo all the development had been done on, (2) Our distributor ripped us off even though they knew nothing about turbos, (3) the Evo Big Twins came along and that spelled and end to Shovelhead blow through carb development that we were doing in 1984-85. In 1985 we moved to the evos with our blow through the carb design seen on Joe Walker's famous Jap Zapper show/go bike (see photo).

Some 25 years later Shelby got in contact with us and we got her some prints of the photo shoot. She was at the audition for the shoot with a friend and did the shoot after another model sort of dared her to give it try. Pro photographers Mark Rice and Ron Tuso did the shoot. Small world. Shelby is doing fine these days, involved in religious art.