Engine as a stressed member. With the engine installed the frame became triangulated. We had special bolts made to secure the engine which were almost a press fit into the Kawasaki engine cases. The four inch diameter backbone was bent to allow Kawasaki Z1-cam cover removal. The large diameter gives great torsional strength but the tube only had a wall thickness of .0625". Without the engine to complete the triangulation the frame would flex. We shipped the frames with a "faux engine strut" to keep the frame stiff until the final engine installation. A Colin Chapman, Lotus-esque, approach to chassis design. Light to win races which it did.

Amortisseurs DeCarbon monoshock with custom valving. Timken bearings in neck and swingarm. Mild steel DOM tubing. Might as well have been from the Twilight Zone when it showed up in 1977. Competitors liked to protest it when it was winning. Our answer at the time was anyone could order one. 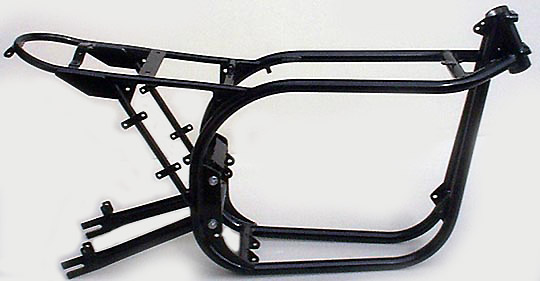 Contrast our frame to the, at the time, state-of-the-art "Featherbed" frame design that everyone used...even the factory racers from Japan. Both designs won races whereas center hub designs from various designers like Andre de Cotanze (ELF), James Parker, Bimota and others never had racing success. No one really did anything innovative for many years until Pierre Doncques and John Britten came along. Their monoshock designs also won races.